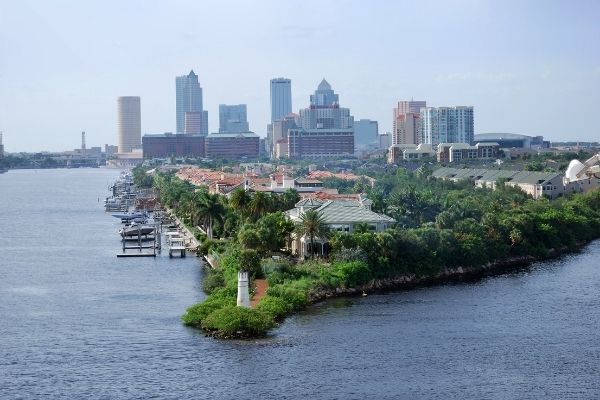 Davis Islands is a community in Tampa Florida located directly south of downtown Tampa in Tampa Bay. It has one entrance along Bayshore Boulevard and is primarily residential but it is home to the Tampa General Hospital, one of the largest in the area. Read on below the listings to learn more about Davis Islands.

Included below is Davis Island Homes for sale. If you would like more information on any of these Davis Island Home listings, just click the "Request More Information" button when viewing the details of that property. We can provide you with disclosures, past sales history, dates and prices of homes recently sold nearby, and more.

And, if you haven't already, be sure to register for a free account so that you can receive email alerts whenever new Davis Island for sale come on the market.

Davis Islands is a Tampa Bay neighborhood and archipelago on two islands that were formally three in Hillsborough County. It offers views of the Port of Tampa and is home to about 5500 residents.

This is been touted as one of the most desirable neighborhoods in Tampa. Its unique history makes it an interesting place to live. It was built on two man-made islands that sit on small natural islands. These natural islands at the mouth of Hillsborough River were originally called Big Grassy Key and Little Grassy Key. It wasn't until the 1920s that the area was dredged from Tampa Bay and built up two distinct islands. The developer responsible for the islands was David P Davis who bought the land for $350,000. He was envisioning the Great Gatsby of Florida and developed 306 lots, which sold for $1.63 million for the time the community opened in 1924.

Davis Islands was originally designed with a golf course, airport, swimming pool, and three hotels, however, the real estate market wasn't as great and what was supposed to be over $4 million in new real estate only fetched a mere $30,000. Unfortunately, banks begin to seize hotels and other properties on the island and in 1926, good old Dave Davis was lost at sea during a voyage to Paris with his friend. However, over the years, the beautiful Davis Islands continue to build and grow and today sitting just 3.3 miles south of downtown Tampa, Davis Islands is home to several neighborhoods, restaurants, cafés, bars, and shops all along the tranquil sidewalk setting. It's pet and pedestrian-friendly and with the Tampa General Hospital located at the northern tip of the islands, it's one of the areas largest tertiary referral centers.

Things to do on Davis Islands

Full of historical homes and administration buildings, Davis islands offers both residential and commercial shopping. Restaurants such as Islands Pizza Tavern and Margaritas Mexicana are some of our favorites. The Davis Islands yacht club is a private club sponsoring sailing races and a cruising fleet and with outdoor recreation like bicycling and boating, picnicking and beachcombing, Davis Island has just about everything you'd want right on the islands including beautiful residential homes.

"Davis Island is no doubt one of the top places in the world.
Feels like a village setting with residents riding golf carts, two marinas, sailing club, running trails and even a small airport all within 5 min from downtown Tampa, all the restaurants, parks, Bayshore Blvd., Tampa's Riverwalk, TB Lightening arena, Ybor city and much more.
Best of all - the nicest people are your neighbors." - Niche

The average home price is about $715,000 and 61% of residents own their own home, however, there are luxury estates of over $10 million with prominent famous residents such as Derek Jeter, Tom Brady, Bob Buckhorn and others. It's easy to see the luxury homes along the waterline and with the airport at the southern tip along with the dog park and several other parks, private airlines and helicopters are a frequent occurrence on Davis Islands.

For more information on homes for sale on Davis Islands, browse active listings above or contact my office below for a personalized touch to your home buying or selling experience. When you need to buy or sell on Davis Islands, let your experience be easy and fun with John Kinnunen.